A maiden vintage from a high river valley, and probably a South African first!

Introducing Woolworths Organic Pinotage Rosé Spumante, an organic brut that not only begs to be part of every party this season, but offers bubbly lovers additional feel-good factors:  This wine was produced from organic grapes in a pristine, internationally certified vineyard on Hout Baai farm in the McGregor valley, where the environment comes first.  Sustainable agriculture is practised among the fynbos where mammals and reptiles, birds and insects live in protected peace.

Woolworths’ astute wine consumers are the first to enjoy the delights of this new sparkling rosé. Hout Baai farm planted pinotage some three years ago, and this maiden harvest was vinified in a certified organic cellar at Rooiberg winery outside Robertson, where strict regulations ensure that additives, including minimal permitted Sulphur, are controlled.
As South Africa’s only indigenous wine cultivar, pinotage is proving to be adept in diversity as winemakers experiment with the berries.  More and more cellars are recognising that young pinotage grapes of good quality make very agreeable rosé and charming sparklers.  Early picking ensures optimal freshness and a lower alcohol count, both desirable current trends. With alcohol levels of just 12% this sparkler  is both a tantalising aperitif and an excellent companion to fresh and smoked salmon, sushi, and a range of summer salads.
Find this organic sparkling pinotage at those Woolies stores that stock wine, at a price of R53,95. 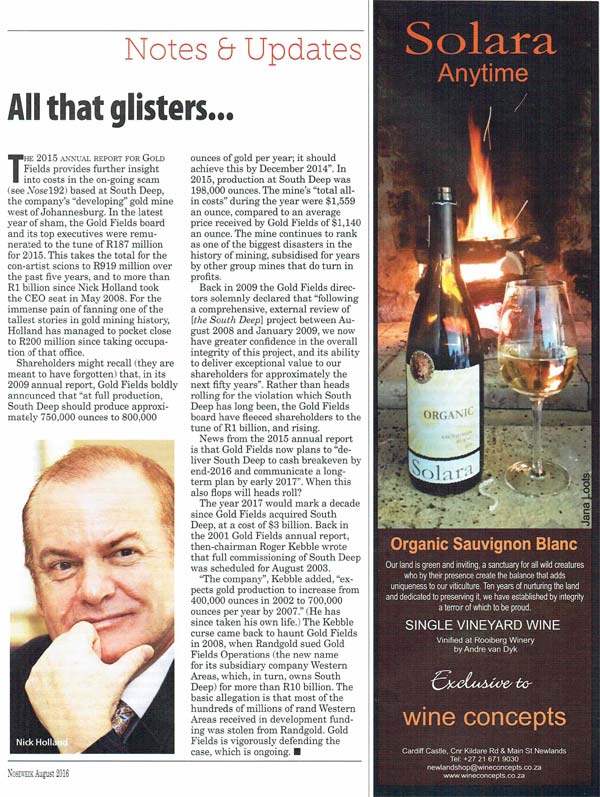 Organic wine farming and production –  As many grey areas as green…

Perhaps it’s only when you have taken part in an organic certification audit that you begin to realise the lengths wine farmers and producers need to go to to obtain that international certification. MYRNA ROBINS reflects on a complex and cloudy subject.

Earlier this month I was lucky enough to sit in on such an audit, and one that had particular significance for both the farmer – Patricia Werdmuller von Elgg – and one of the auditors! But let me  set the scene…

If you wish to label your wines as organic, you need to have your farm and cellar certified by one of the international certification organizations. One of these is SGS, an enormous global group which certifies many manufactured as well as natural products.  Because of the limited number of serious organic farmers in South Africa, SGS recently appointed a German company specialising in certifying organic agriculture to conduct the final audit and issue the certificates.

Hout Baai farm is a beautiful boutique wine farm just outside McGregor, in a high valley that looks onto the Sonderend mountains which surround it. From the owner’s  terrace  sweeping views over vines take the eye  toward Die Galg – the saddle at the end of the “road to nowhere”  - which is really a high meeting place for hikers and travellers who revel in the protea-rich fynbos which cloaks the terrain.

The picture-perfect farm has been certified as fully organic since 2005. This year Hout Baai was  chosen by the certification team  as an example of just how an organic farm should look and operate with a place for everything and everything in its place. The audit was particularly important as not only was the resident SGS auditor conducting the checking, but the LACON international auditor was present, overseeing the process, and both were under the eagle eye of DAkkS, the German accreditation body for that country’s Federal Republic.

The inspection date for this three-tier audit was set for mid-July, but the three arrived in Mcregor  a day ahead of schedule. They settled into the office where the local representative of the certification body started her work with a long list of questions, which needed not only oral answers but proof by way of reams of paperwork.  Pat Werdmuller possesses more files than I have ever seen on a farm, where delivery notes, invoices, statements, receipts and printouts provide years of proof of transactions with approved service and material providers.  These were hauled out on demand, as they worked their way through how water is tested, how pipes are cleaned, what fertilizers are used. Records of purchase of guano, seaweed and donkey manure were checked then questions turned to frequency of their application and in what concentrate?

Moving to harvest time, when grape picking machines were hired, questions were asked about the possibility of their bringing in unwanted residue of non-organic matter. They are delivered the day before, replied farm manager Del Jones, “so our guys can scrub and wash them down, ready for harvesting which started at 3.30am.

If there is any doubt about dates, the diary is consulted – this set of annual volumes, dating back to when the farm started operations – is filled with daily entries of chores completed, indoors and out, accompanied by photographs as way of proof.

The second half of the audit took the form of a tour of the farm, as the visitors were shown firebreaks, and buffer trees along boundaries (to limit the chance of non-organic sprays drifting over from neighbouring farms).  The approved korog, a wheat-like grass  planted between the vine rows  to provide a nutrient-rich mulch was starting to show green and pruning of the sauvignon blanc vines was under way , each row numbered (and named after an animal or bird  that frequents the farm).  Del showed the inspectors the sizeable hole dug by a friendly anteater which had these Germans looking a little bewildered. She also pointed out the camera traps which record the visits of  caracals, jackals, hares and antelope, as this farm is as much of a nature reserve as it is a wine grape farm.

The compost plant and the worm farm were duly inspected, and then the stores and workshop revealed just how diligently tools are looked after and kept in their place. The farm labourers’ wendy house – cosily furnished with places for both wet and dry weather uniforms and footwear  and sporting refreshment facilities – was duly admired and also noted were the required warning signs and notices detailing safety and health information both inside and outside buildings and machinery.

It came as no surprise to any of us that Hout baai farm passed inspection with flying colours and was thanked by SGS for their faultless presentation and co-operation.

Since that day I have been thinking about the number of organic wine and grape producers listed in the latest edition of the SA wine industry directory, which I received recently.  In this useful compendium, published annually by WineLand media, a total of 38 organic growers and cellars are listed. According to one Western Cape producer, who shall be nameless at this stage, only three of these are certified organic.  While I have not trawled through those 38 to see if they have included details of international certification in their Platter entries (if, indeed, they are all listed in Platter),  it does bring up the vexed question of some producers labelling their wines as “organic” without having been certified.

"We’re all organic these days!" was a cheerful comment from one (non-organic) farmer and winemaker. Many would beg to differ.

Those who are spending inordinate amounts of time and money to transform their farms and cellars to comply with the exacting demands of global organic auditors do so, of course, of their own free will. But it’s unsurprising they also grit their teeth in frustration at the lack of monitoring and control over those who are benefitting from the green and environmentally-conscious consumer through fraudulent  labelling.

Even if farms grow grapes and produce wine organically, only those certified by an internationally accredited body – accompanied by a seal of this organisation – are entitled to label their wines as organic. However, some producers who follow organic principles in every respect choose not to be certified, because of the  expensive, labour- intensive, regular, obstructive and lengthy inspections.

And to further muddy the waters, SA producers are allowed, I am told,  to state on bottle labels that their wine was produced from organically grown grapes. And, what about the cellars who produce a range of organic wines alongside non-organic …

At which stage, it seems high time for a glass or two  of enjoyable  wine, made from organically grown and certified grapes in an organically certified cellar. Make mine a Solara sauvignon blanc. Cheers!